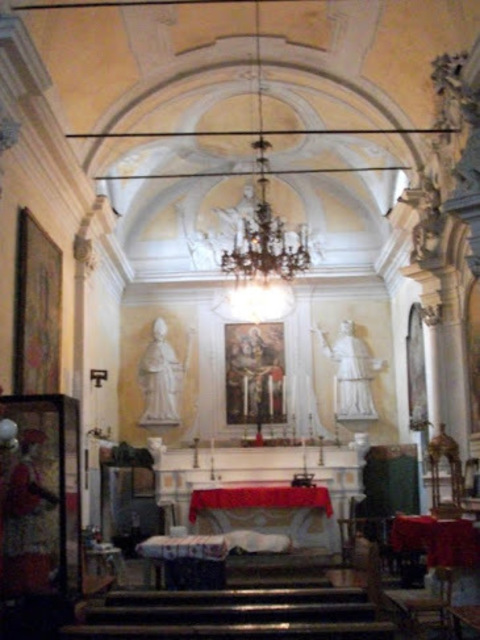 
The church of San Marcello is the oldest in the village of Pacentro.  Built in 1047 by Adalberto - a monk from Casauria - in honour of Pope Marcello I, it was subsequently restored by Bishop Berardo of Forcone following a fire in 1166. For a long time it was the parish church of the village and was used as a burial place until at least 1743.  Like many other churches in Pacentro, San Marcello is also mentioned in the papal bulls: it was small, proportionate to the number of inhabitants of the time, and equipped with a sacristy and an altar .

The entrance to the church is via a staircase leading to the “durazzesco” portal made of carved stone (15th century) which brings you out onto the right-hand side of the nave. On the left of the portal, the facade which is crowned by a semi-circular, upper window, features a recess with a pointed arch depicting a fresco of the Virgin and Child with St. Marcello. Of great artistic value is the wooden portal with mirrors and mouldings made, ​​or restored, in 1697 thanks to Father Isidoro Rossi who was the vicar, archpriest and pastor. The left-hand nave no longer exists however, a privately-owned building adjacent to the church itself, still retains recesses carved in the walls and the visible remains of frescoes. Today the floor plan of the church shows a single nave with the main altar and side aisles made of stucco constructed ​​during the 18th century . Since 1802 the church has been the headquarters of the local Brotherhood of St. Charles Borromeo which takes care of both its vestments and its maintenance. Of great interest is the font which is positioned near the entrance to the church and which features a motif of a skull and crossbones at the top commemorating the joining of the pious Pacentro association of St. Charles Borromeo together with the Archconfraternity of Prayer and Death in Rome.