Church of the Madonna del Casale 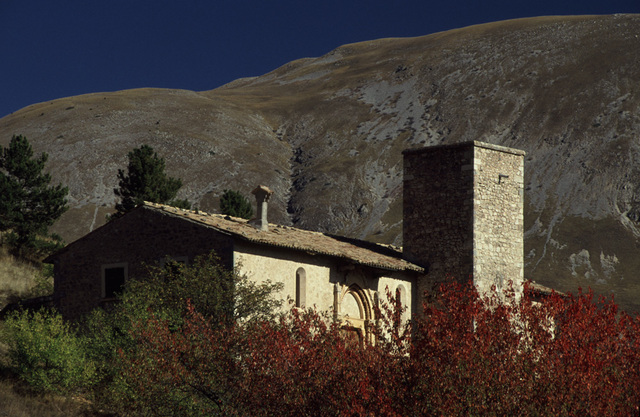 The church of the Madonna del Casale, or the Madonna del Carmine, is situated on the Cinquemiglia plateau, away from and above the village of Rocca Pia, on the side of one of the mountains that surround the vast plain.
The dating of this church is not conclusive but a stylistic analysis suggests it as being from the 14th century. It is not inconceivable, however, that it might have been built even earlier.
Its position is in an area where the ancient (probably Norman) villages of Roccaduno, Casale San Nicola and Casal Guidone once stood and which were then reduced to ruins in 1474.
Although today no trace remains of these settlements, the name "Colleguidone" still indicates the location on which the church stands. Thus we can assume that the church, rather than simply a place of worship in the village, is the last evidence of a community which lived in the area and then probably moved to the village of Rocca Pia. Certainly the church was, over the centuries, a shelter for the many pilgrims travelling along the plateau (located at 1,300 metres above sea level), especially during the winter season, when the weather is still very inaccessible.
Still legible on the walls are the graffiti left by travellers. The oldest inscription is from 1675, and the most recent dates back to the night between the 15th and 16th of February 1863 when soldiers from Piedmont found shelter in the church during a snowstorm.

The church, made of local stone, has its main entrance in an unusual position along the south facing side elevation. It has been dated by comparing its main portal to the church of San Filippo Neri in Sulmona, which is stylistically very similar, and it has been considered likely therefore that the church was built before the end of the 14th century. The portal is framed by two columns with a polygonal section resting on a high base and crowned by capitals decorated with acanthus leaves and two shrines with closed, trefoil arches. The top is finished by a pediment decorated with cats and surrounded by two helical columns. On the lintel is a relief depicting the Lamb and Crucifer. Unfortunately, little remains of the fresco that once decorated the lunette. Along the southern side elevation, near the portal, there is a square bell tower whose functions were also likely to include being used as a lookout for defensive purposes.
The interior is a single rectangular room with a raised presbytery, a semicircular apse and exposed ceiling beams. There are frescoes from the 16th century by local artists, depicting scenes from the life of Christ and the Virgin Mary and the Annunciation, interspersed with works of a more devotional nature, as the Man of Sorrows and Our Lady of the Snow.