The Church of Jesus and Mary 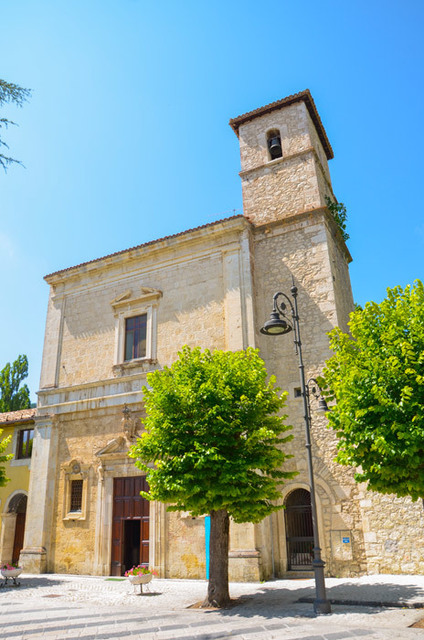 
The Church of Jesus and Mary, and the adjacent convent of the Minor Friars, were built in 1611 at the behest of people from Pescocostanzo who wanted to accommodate a community of Franciscan monks. The facade of the church, as it stands today, does not correspond to the original design, but dates back to 1855. The initial floor plan, which we can see on the perspective map of Pescocostanzo by De Mattheis from 1715, had an entrance porch, a single central window and a pitched roof.


The 19th century facade is divided into two levels by a high string course which is moulded and framed laterally by an order of superimposed Tuscan pilasters. At the bottom of the facade, the centre is dominated by a stone portal from the late 16th century, on top of which is the crest of the Franciscan Order. It is flanked by windows with a mixtilinear pediment featuring the monograms of both the Virgin Mary and that of St. Bernardine of Siena. At the top, crowned by a slightly projecting moulded cornice stone, there is a rectangular window with recesses and a broken triangular pediment with low ledges.
The church has a single hall layout with pseudo side chapels and altars, framed by a double row of architectural fluted Ionic pilasters. On the counter-facade is a choir with stone cross vaults, in all probability resulting from when the nave of the church was enlarged as part of the annexation of the structure from the ancient portico on the facade. The choir of the Friars is slightly elevated on a curved staircase and is hidden by the main altar. The altar itself is the masterpiece of the architect Cosimo Fanzago from Bergamo who in turn was influenced by the work of the roman architect Bernini. The altar has two overlapping levels: the lower level with two side entrances to the choir and a frontal central tabernacle with a decorative panel and a mixtilinear profile. The altar captures the light from the rear window of the apse creating a chiiaroscuro effect to highlight the presence of the tabernacle. The upper level, with its imposing Baroque pediment, protruding columns and broken pediment, frames the canvas depicting The Appearance of Jesus and Mary to St. Francis of Giambattista Gamba. The Baroque hall, enriched by stucco features, frescoes and polychrome marble, is punctuated by a vaulted ceiling of segmental arches below which are the architectural orders and the side chapels.
Located to the left of the entrance, the first side altar was built in 1639 at the behest of the noble Leonardo Ricciardelli. It has a late 16th century design with the usual architectural structure of stone columns with white, grooved cables and composite orders which frame the central painting of the Virgin and Child with St. Francis. The adoption of the new Baroque style is by now mature. The second altar on the left, that of Our Blessed Immaculate Virign, is attributable to the stonemason Giuseppe Cicco from Pescocostanzo. Here coloured marble has replaced the white stone and marble inlays and forms curvilinear shapes and strong colour contrasts that testify to the influence of Fanzago over the the local artists and craftsmen. The artist Norberto Cicco from Pescocostanzo is credited with the altar of St. Anna (opposite that of the Immaculate Conception) in which the slender composite columns rotate in relation to the front. They support an imaginative Baroque pediment and frame the painting of the Holy Family with S. Anna by Giambattista Gamba. Another interesting monument is the marble two-tone, black and white decorative panel with floral motifs that is close in style to Art Nouveau. Again of great interest is the front altar of St. Anthony on the right of the entrance, also attributed to Norberto Cicco, in which the architect seems to abandon geometric design in favour of a more naturalistic representation. The panel shows a pattern of capillary leaves and flowers including moving snakes, insects and birds. On the lower section we can see four letters: "IDRC" which, according to the historian Gaetano Sabatini, confirm the intervention of Roberto Cicco from Pescocostanzo. (Incidit Delineavit Robertus Ciccus).
Built by Fanzago, the cloister is located to the left of the church. Its portico is formed on each side by five arches that rest on square pillars with bases and simple capitals. Above it is a continuous stone parapet and at the centre of the cloister there is an octagonal well. The north wing of the cloister has a loggia on the first floor with twice as many columns as there are arches below.